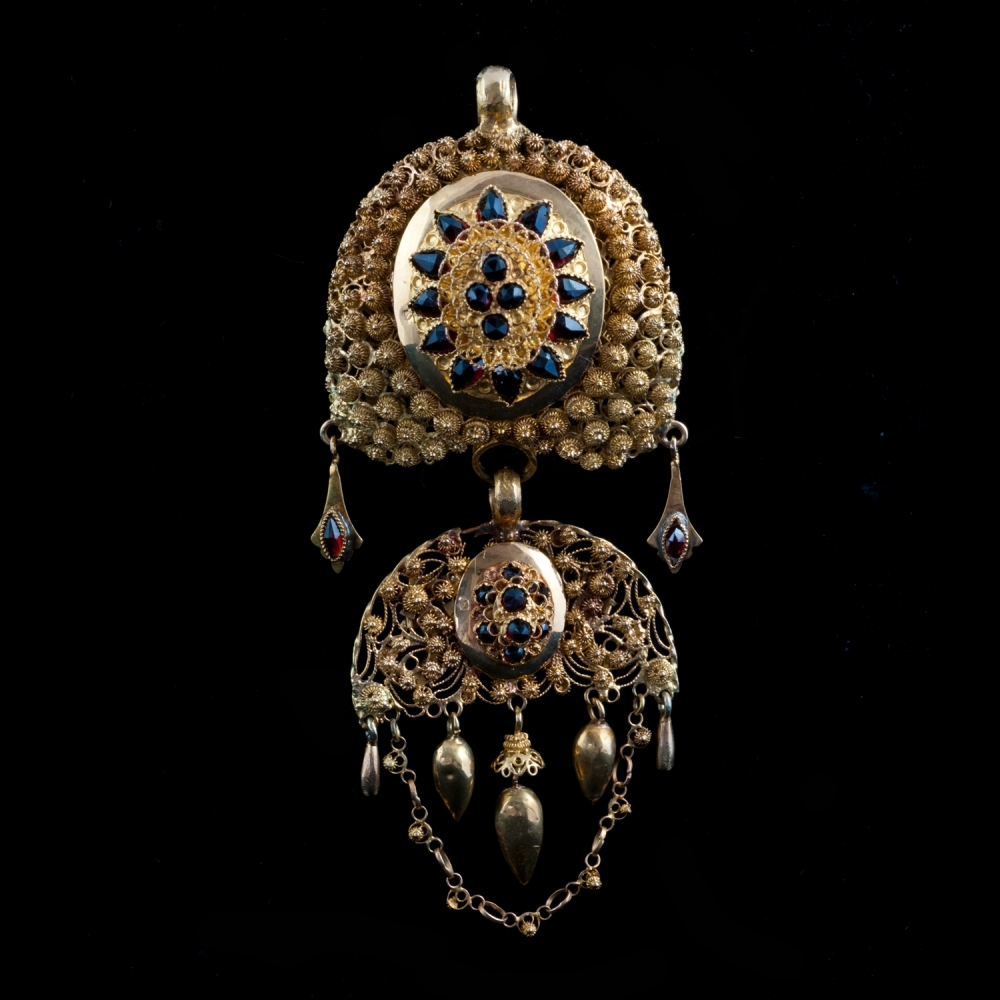 Our heritage
Thinking of typical Dutch jewellery, one immediately thinks of the distinctive traditional regional jewellery and ornaments. These represent a rich and varied heritage from the farmers, tradesmen and seafarers of our society. From distinguished landowners, peasants, rich ship-owners and fishermen, and even more from their wives. The bourgeoisie also shared in this wealth, splendour and finery. Hard working families, who - without any assistence from government or grants - during centuries built up their decent living here, an existence of which we all can be proud.

Dutch craftsmanship
Especially in the 19th and the beginning of the 20st century this tradition flourished greatly and brought forth unique jewellery. On view in a collection, these jewels represent a varied and rich historic Dutch cultural heritage, for which exists much interest and appreciation at home as well as abroad (see e.g. the collection in the Victoria & Albert Museum, London). Strikingly beautiful is the exceptionally fine technique of the ‘wire- and filigree-work’ in 14- en 18-carat gold and in silver that Dutch goldsmiths manufactured with great skill (many times with the help of small children’s fingers).

Differences in social class, religion and marital status
These golden and silver jewels, sometimes ornamented with diamonds, were worn proudly and for specific occasions. They demonstrated the wealth of the owner. A golden ‘oorijzer’ (ear-iron, a head dress worn to keep a lace cap or bonnet in place) could only be worn in the province Friesland by people who owned at least 40 cows. Owning 25 cows, only a silver cap was socially permitted. The number of swans (1, 2 or 3), engraved in the forehead ornament in Walcheren (Zeeland) had the same function: to  demonstrate inequality in whealth between people in the same local and regional community. The same social differences were demonstrated by the thickness, the number and material of the spirals of the ‘oorijzer’ (head dress) on the islands in South Holland and Zeeland. And for the poor and those of lesser means, there was always copper, brass and iron…….

Besides inequalities in wealth, also those in religion (Protestant or Roman-catholic, like in the ‘oorijzers’ in Beveland) and in marital status could be discerned by the jewels themselves and by the way in which they were worn. E.g. was the forehead’s ornament stuck into the cap from the right (in case of married women) or the left side (for unmarried women)? The Roman-catholic traditions of North Brabant were of course reflected in their jewellery. Its meaning was clear to all viewers!

Jewels, also for mourning
Whomever was in mourning after the death of a family member, showed this for months by replacing the golden and coral jewels by silver, garnet, jet or glass. Many jewels were kept especially for a mourning period, like rings, brooches and cap pendants. Well known is also mourning jewellery with hair of the deceased mounted within the gold or silver jewel. In general, these social codes regarding class, religion and mourning were maintained pretty strictly and without dispute!

Regional differences
Regional differences could also be discerned from the ornaments. Not eveything was worn in the whole of the Netherlands and many were specifically worn in certain regions, provinces or villages alone. Dutch experts know all these regional differences well. Gold jewels with small pearls are mostly from coastal regions, e.g. from the village Scheveningen. Pieces, unique to a region or a village, were mostly made by a regional goldsmith although some towns would create ornaments for the whole of the country, for example the city Schoonhoven. Worth mentioning here is the rich history and tradition regarding this kind of traditional jewelry of the provinces Zeeland, North Brabant, North and South Holland and the three northern provinces. But also Twente, the river IJssel-region and the large region of Kampen need to be mentioned here for their richness of jewellery.

Fashion in jewellery and clothing
Fashion trends could be observed in traditional regional jewellery: changes of shape of the oorijzer (head dress): drops in ornaments became longer, shorter or smaller, depending on type of clothing, caps and hair dress. Sometimes certain jewels lost their popularity temporally. But much jewellery was passed on from generation to generation and was thus kept available and visible for daily or weekly use, depending on the occasion.

Functions: practical and ornamental
Many ornaments first of all had a very pracical function in daily life. E.g. knots to fix a shirt and trousers for men and boys, pins for a head cap, clasps for female shirts or skirts for women, and buckles for shoes for both sexes. But most of them were purely ornamental; e.g. the hugh golden pendants for oorijzers (head dresses) of well-to-do wives of ship-owners from Vlaardingen, the magnificent pendants of oorijzers from Zeeland, the commonly worn garnet bracelets, bonnet- and ear-pendants or the very popular and well-known necklaces of gold and garnet (‘bootjeskettingen’) from Friesland and North Holland. Even today many women are seeking these unique jewels!

Golden earrings
Many times they had both functions: practical and ornamental, like the golden hoop earrings of the fishermen around the Zuiderzee (Urk, Volendam) and in Zeeland (Tholen, Ierseke). Earrings were ornamental, but simultaneously a funeral insurance in case the fisherman died at sea and was found dead on foreign shore. These jewels are still rather popular and many fishermen, skippers and boatmen are wearing golden earrings to this day. With farmers these earrings, gold and silver, were also quite common, because they were said to improve ones sight (esp. in Zeeland, Brabant and Groningen).

Collection available
We are proud to present to you a collection of pieces, having been passionately collected over decades. These are safeguarded now for future generations. This connoiseur jewellery is now made available and deserves - without any discussion - a new life. For collectors, but surely also for women with an eye for beauty, sophistication and tradition.
Maybe for you?

We wish you much pleasure and joy in viewing these unique masterpieces from an historical Dutch period. May this presentation enable you to find that special acquisition…….
Amsterdam, April 2014