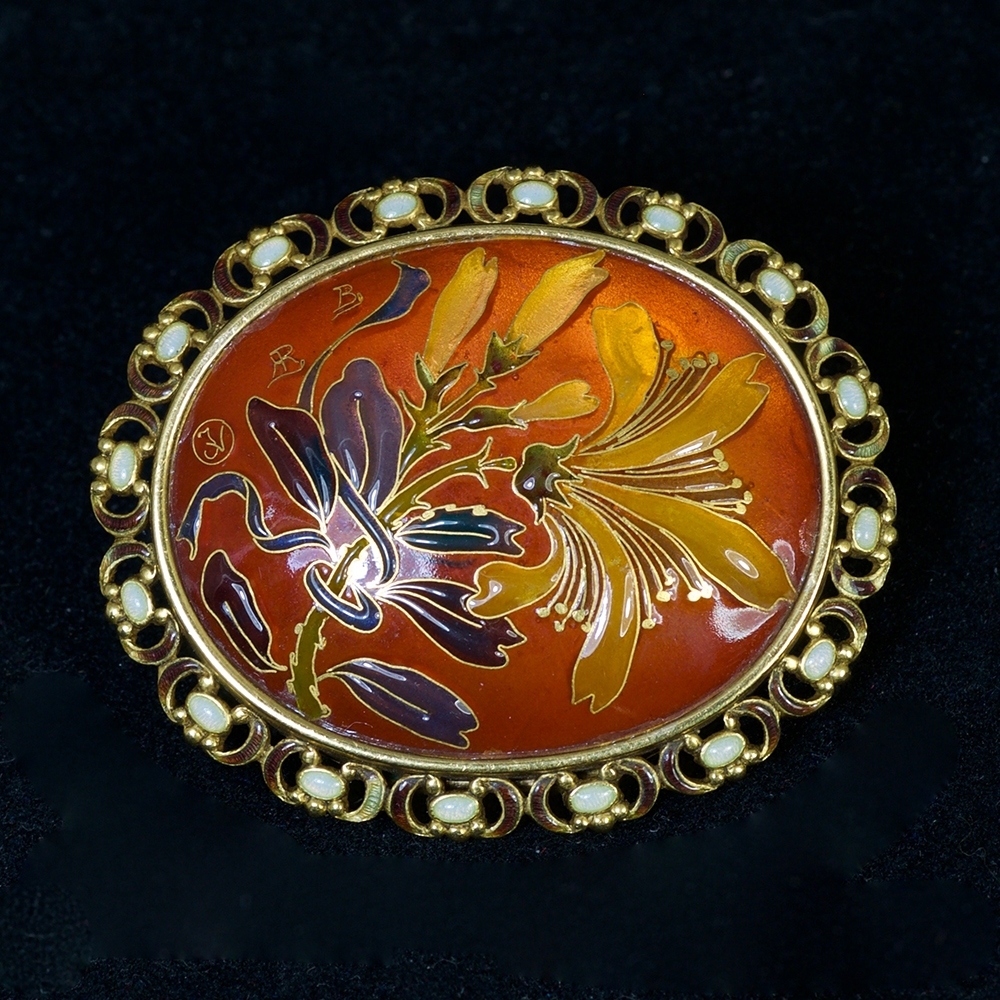 In the 19th-century jewellery styles were inspired by the past. For example Neo-Classicism, neo-Gothic, neo-Renaissance and Neo-Louis XVI, right up to the 1890s, the beginning of the Art Nouveau. We show you:
- A brooche by Felix Bracquemond
- A face-à-main by René Lalique
- A door George Le Turcq
- A pendant / brooche door Gabriël Falguières

The Paris based art dealer and connoisseur Siegfried Bing specialized in Eastern art since 1878 at 19 Rue Chauchat. In this shop Vincent van Gogh bought 600 Japanese drawings for near to nothing at that time. 500 of those drawings are now safely stored in the collection of the van Gogh Museum in Amsterdam. In 1891 Bing founded an influential, internationally distributed magazine devoted to the art of Japan, “Le Japon Artistique”, to spread the knowledge about Japanese art.When the competition for selling Japanese artefacts became too big, Bing looked for other ways. He started to import contemporary art objects with a Japanese influence specially made for the European market. This influence was crucial. Japanese art was inspired by nature with a characteristic asymmetry.

Japan opened its doors to foreign trade in 1854. Commodore Perry forced the Japanese Shogun Tokugawa Ieyoshi to sign the Convention of Kanagawa, a US-Japan trade treaty, marking the end of Japan’s 200-year policy of seclusion. Until then only the Dutch were allowed to trade from the small artificial island Dejima. Shortly after Japan opened its doors to foreign trade a shipment of porcelain products arrived from Japan, wrapped in sheets of paper. The story goes that the goods were wrapped in pages of a copy of the Hokusai Manga, a collection of sketches by the Japanese artist Hokusai. The French artist Félix Bracquemond, who discovered the sketches, shared them with his artist friends in Paris. The sketches depicted flora, fauna, landscapes and everyday life.

A catalog of a retrospective exhibition of Bracquemond’s work in 1907 mentions four brooches executed in plique-à-jour enamel. The jewels were commissioned around 1904 by Baron Joseph Vitta, a wealthy banker. Vitta moved in fashionable artistic circles, making the acquaintance of talented artists and acquiring their work. Prominently visible in the translucent design are the monogram B for Bracquemond, AR for Alexandre Riquet the goldsmith, and JV for Joseph Vitta. The honeysuckle signifies among other thing’s happiness, the lily of the valley stands for humility and brings luck in love.

In December 1895 Samuel Bing opens a new art gallery at 22 rue de Provence, La Maison de l'Art Nouveau. The building was designed by the architect Louis Bonnier. The gallery would give its name to a new art movement emerging across Europe. An artist that exhibited at Bing’s gallery from the start was René Lalique. Lalique’s work was greatly influenced Japanese Art. He used flowers in every stage of life, from a bud to decay and death, as an inspiration for his jewels. The intrinsic value was never the most important; Lalique's jewels are works of art, often with a deep symbolic meaning. Our lorgnette is made of carved horn decorated with purple enamel on 18-carat gold and embellished with two amethysts.

In March 1899 George Le Turcq exhibited several jewels in Monte Carlo. Among them was a pendant bearing the inscription “In hoc Felicitas” or “In this happiness”.The goddess Felicitas could encompass both a woman's fertility or, like Fortuna, general good luck or fortune especially in late fall and early winter. From the earliest times mistletoe has been one of the most magical and sacred plants of European folklore. Or, in a more romantic context, at Christmas time a young lady standing under a branch of mistletoe cannot refuse to be kissed. 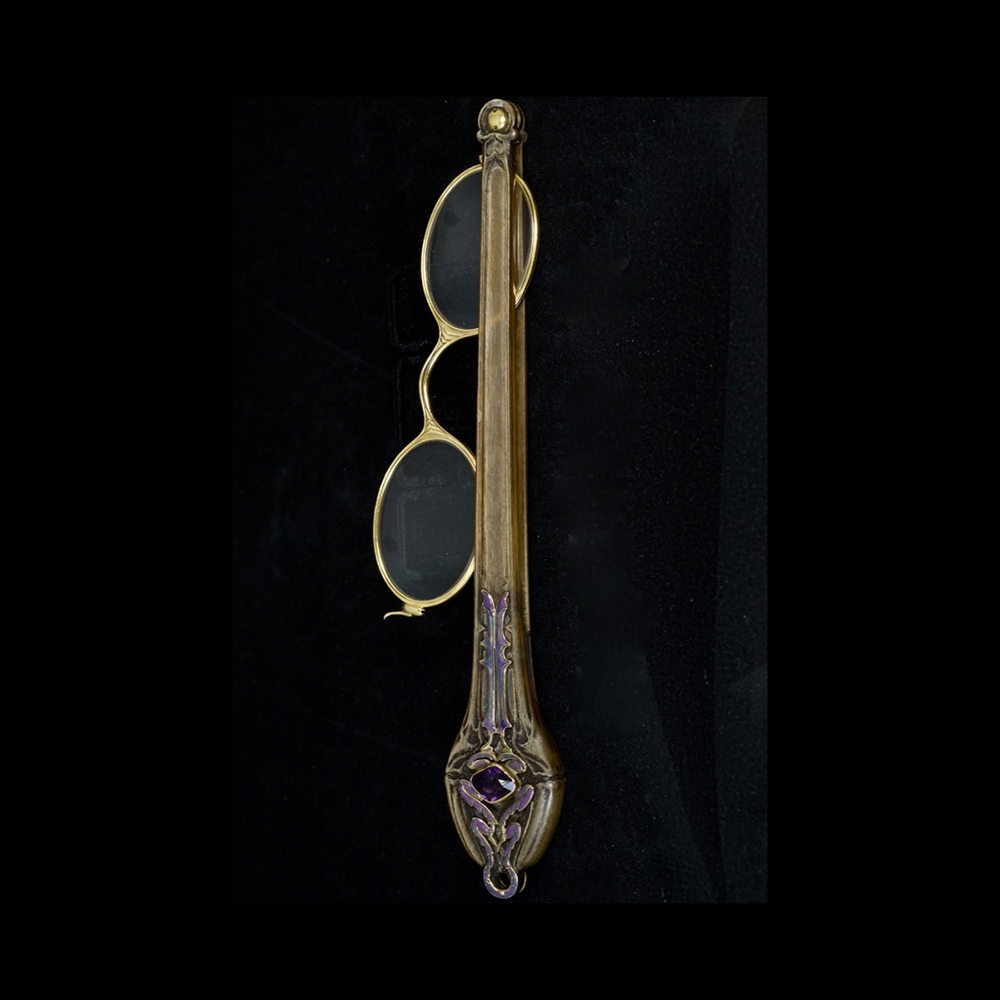 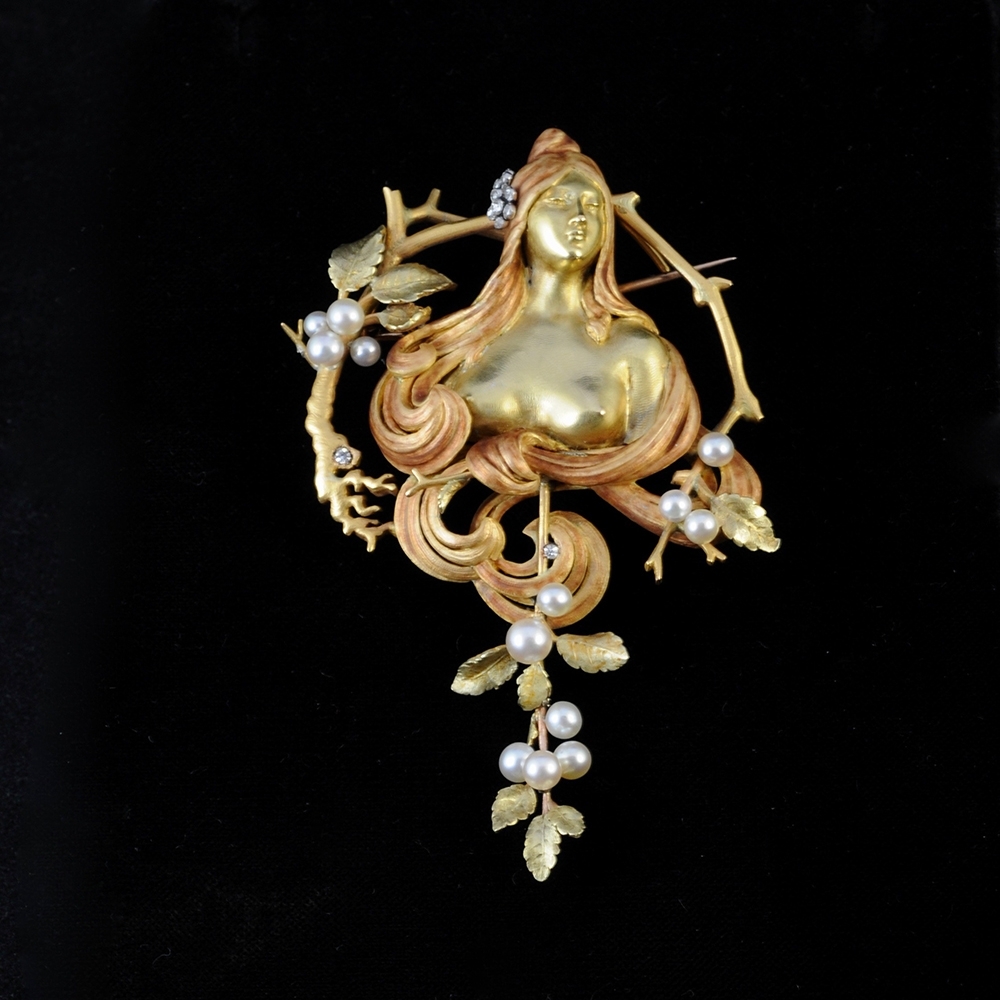 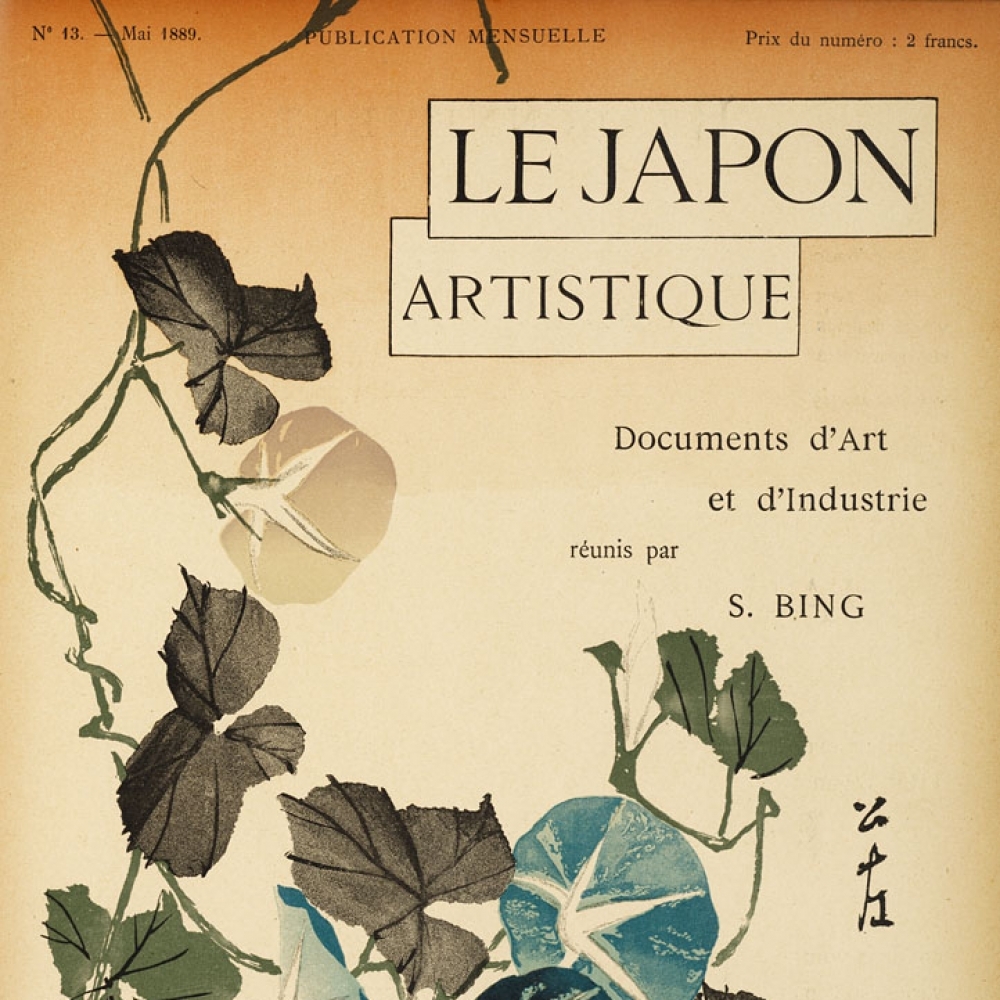