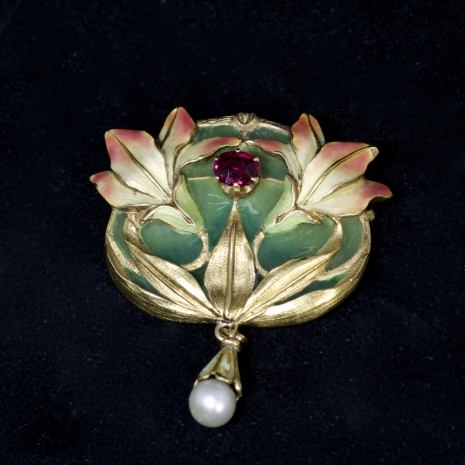 Art Nouveau pendant with plique-a-jour and ronde-bosse enamel in the shape of a flower with leaves, set with a beautiful ruby, at the bottom a natural pearl. Signed G.R. Sandoz and France eagle head.

Weight: 14.3 grams
Dimensions: 3.9 x 3.4 cm
The Maison Gustave Sanzdoz was founded in 1861 by Gustave Sandoz (1836-1891) who was descended from a long line of clockmakers and he continued in this tradition whilst simultaneously branching into jewellery. He was heavily involved in the organization of the Expositions Universelles as well as being an exhibitor and was chairman of the trade organisation which represented the jewellers of the Palais-Royal where he had established premises in 1865. His son Gustave-Roger (1867-1942) took the helm in 1891 and strengthened the company’s focus on jewellery, particularly gold work and gem set pieces for which it quickly developed a reputation. By 1895 the Maison had adopted and embraced the Art Nouveau style and were producing beautiful pieces with a variety of gems and coloured enamels featuring a range of motifs synonymous with the aesthetic. Like his father before him, Gustave-Roger was active in various societies and promoted and exhibited at Paris’s fairs.