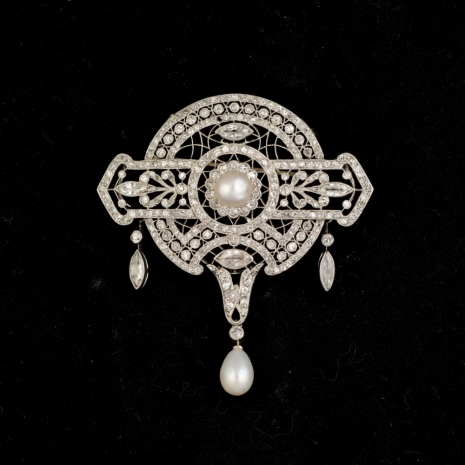 LE SACHE, GEORGES Le Saché, Georges (b. 1849 - ?) Georges le Saché was an important jewellery designer and manufacturer who came from a family of artists and engravers. His father, Emilé Le Saché, was a draughtsman and line engraver. His mother had a modest business selling jewellery at the Palais Royale. 1866 - Le Saché spent his youth in painter’s studios, desperate to become an artist. His parents, seeking a more stable career for their son, sent him to Germany to join Friedman: an important German jeweller. Following this initial experience in the jewellery business, Le Saché went to London to apply his artistic talents in various areas of the decorative arts. 1870 - Outbreak of the Franco-Prussian war sees Le Saché returning home and joining the 1st Battalion of the Mobile Seine Regiment. He fought bravely between September 1870 and March 1871. Following the war Le Saché returned to London. 1872 - Le Saché joins renowned Parisian jewellers Falize as a designer and collaborator. He spent five years with Lucien Falize learning the jeweller’s craft and becoming a skilled manufacturer 1877 - Le Saché marries the daughter of Baucheron, who was a partner in the firm Baucheron & Guilian, one of the most important manufacturing jewellers of the period. Le Saché works for the family firm and eventually takes over the business. Le Saché became one of the most sought-after manufacturers in Paris, supplying all the best jewellery houses with their prime exhibits at the various International Exhibitions. He worked in both bijouterie and joaillerie, producing a rather formal version of Art Nouveau. Le Saché ran his own workshop for 30 years and always kept his works anonymous. 1901 Georges Le Saché was awarded a silver gilt plaque by the Chambre Syndicale de la Bijouterie to recognise his distinction as a jeweller and designer. This was the highest accolade which was richly deserved. 1920 - Georges Le Saché’s makers mark (LS within a horizontal lozenge) was deleted on 6th January 1920