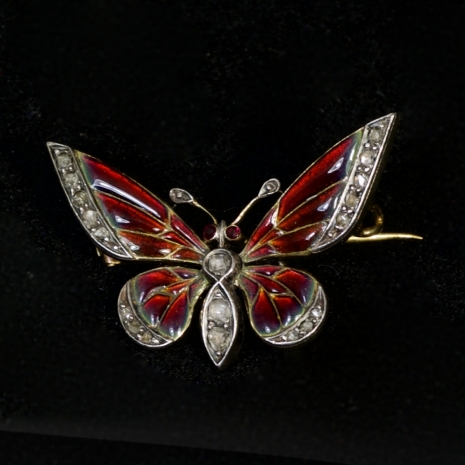 Weight: 4 grams
Size: 3.2 x 3.2 cm
Julien Duval (b. 1865) and Georges Le Turcq (b. 1859) both studied at the École des Arts Décoratifs in Paris before establishing themselves as partners in 1885. They are best remembered for their extraordinary series of enamelled orchid and butterfly jewels. They exhibited a collection of these striking organic jewels at the 1889 Paris Exposition Universelle, at the same time that Tiffany & Co. unveiled 25 similarly enamelled orchid jewels to great acclaim. This, combined with the introduction of exotic plants to Britain and the development of more sophisticated hothouses encouraged orchid cultivation and hybridisation, known as ‘Orchidmania’ and caused a craze for the jewels throughout the late 19th century.     Duval et Le Turcq went on to have similar success with a series of medal jewels which became very popular and sold well both in France and abroad, such as the beautifully made and unusually heavy ‘Virgin of the Catacombs’ gold medal made in 1891. The partners dissolved their business in 1894 and went on to pursue successful independent careers producing much beautiful jewellery.