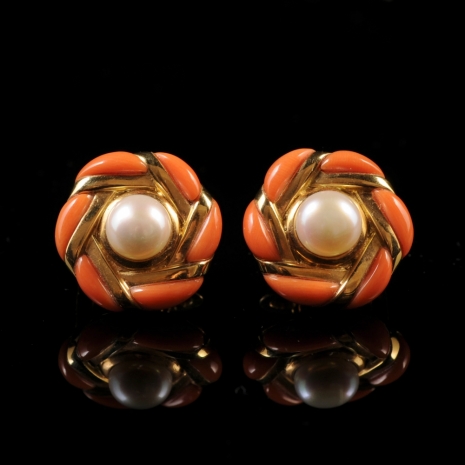 A pair of 18ct gold earclips by Mauboussin. Each designed as a styled flowerhead, set with coral and centering a pearl.
Both signed:'Mauboussin Paris' and '18ct'
Size: 2 cm
Weight: 18.9 gram

Mauboussin (Paris 1827 -)
French jewellers, founded in 1827 by the Rocher & Noury in the rue Greneta in Paris.
Georges Mauboussin moved the business to the rue Choiseul, where it got its reputation in the 1920’s under his son Vintage oorclips' Paul Mauboussin (1900-1984).  For years Mauboussin was considered as leading in the field of Art Déco jewellery by American magazines likeVogues, Vanity Fair and Harper’s Bazar. Mauboussin branches came into existence in New York, Buenos Aires and London, but always under strict control of Mauboussin, Paris. They already were famous for their selections of diamonds, other precious stones and pearls, but their fame became even bigger through the application of till then unusual materials for “haute joaillerie” like: crystal, coral, onyx and jade and the combination of these in daring settings. Well-known customers at that time were for instance the Maharadja of Indore and Queen Nazli of Egypt. And from Hollywood: Marlene Dietrich, Greta Garbo and Paulette Godard. The House Mauboussin survived the financial crisis of the 1930’s and after de Second World War they settled at Place Vendôme, were the 5th generation from the Mauboussin is in charge since 1998. In the 1980’s they had a new success with the “Ligne Nadia”, for which mother-of-pearl is combined with diamonds; since 1994 they also design and sell watches. Mauboussin also made several ‘automates’, decorative objects that can move, covered with precious stones.