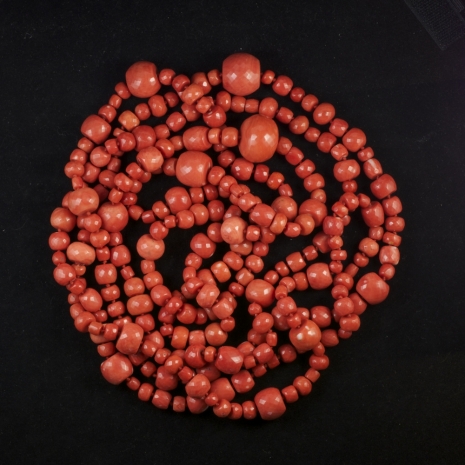 The faceted coral beads were bought from an old lady by Tony Duquette, Hutton Wilkinson and Dodie Rosekrans during their travels in Bhutan in 1999, after which they created this necklace. Duquette and Wilkinson were the interior designers of many of Rosekrans’s homes, for example of her palazzo in Venice. She also wore their jewellery, in combination with the haute couture for which she was well known. In september 1999 Duquette passed away, making this necklace one of his last works.

'Beauty, not luxury, is what I value,” was Tony Duquett’s mantra.

Duquette created his early jewelry pieces at the same time he was designing ballroom scenes and fashion and dream sequences for MGM studios, 20th Century Fox and Universal Studios. His film work included “The Ziegfeld Follies,” starring Fred Astaire and Lucille Bremer, “Lovely to Look At” with Zsa Zsa Gabor and “To Catch a Thief” with Cary Grant and Grace Kelly. Legendary directors Vincent Minnelli and Alfred Hitchcock sought out the freelance designer for his ability to bring his bold, fantastical creations to their sets.


His 1951 solo exhibition in the Louvre included a collection of his jewelryin 18k gold. When the Duchess of Windsor saw his pieces, she commissioned him to make a necklace of citrine, peridot and pearls. Duquette presented her with an 18k gold wreath of vines and flowers and she wore the necklace often, according to Wilkinson. By wearing it to evening events even though most wore platinum at the time she started the trend of wearing gold jewelry after five o’clock.