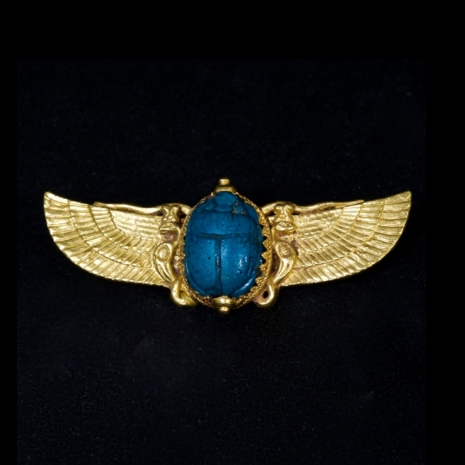 An antique 18k gold brooch with faence scarab in the Egyptian Revival style by Jules Wiese, made of 18k gold. The high karat gold brooch has chased wings with two vultures supporting a blue faence scarab. Gold granulation surrounds the bezel prongs supporting the scarab. The brooch dates from the first Egyptian Revival period occurring at the time of the opening of the Suez Canal in the late 19th century. Signed Wiese, with the French assay mark. Wiese was a pupil of Froment Meurice, a 19th century master jeweler. Wiese was highly influenced by Castellani whose influence is evident in this work.

Jules Wiese (1818 - 1890) was born in Berlin under the name Julius Wiese In 1839 Jules Wiese moved to Paris and began his collaboration with Parisian jeweler Froment-Meurice. In 1849 Jules Wiese received a medal for his collaboration with Froment-Meurice at the Paris World Exhibition, which lead to many new commissions.He created neo gothic and neo renaissance style jewellery and introduced an archaeological style to jewellery using Hellenistic motifs of lions and rams. He also worked for the Catholic church. His enamel work was highly redeemed and in 1855 he was awarded a first prize medal at the Universal Exhibition of Paris. His reputation became even stringer at the London World Exhibition of 1862. Louis Wiese (1852-1923) was the son of Jules Wiese, he continued to explore the Renaissance; Gothic, religious and archaeological themes used by his father.