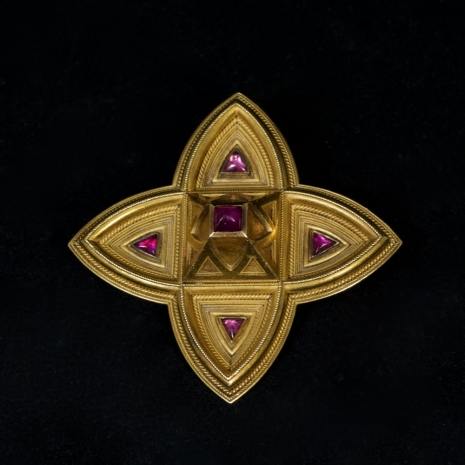 In the 19th century, Etruscans revivalists like Castellani were recreating jewellery that was made in the 9th - 4th centuries BC.
When the Etruscan Regolini-Galassi tomb (named for its excavators) in Cerveteri, Italy, was excavated in 1836, the papal government invited noted jeweler Fortunato Pio Castellani and his thirteen-year-old son, Alessandro, to examine, and later restore, the extraordinary gold adornments found in the burial. Young Alessandro was particularly fascinated by the golden granulation on several ornaments. After many years of experimentation, he eventually mastered the art of embellishing gold sheet with minute gold balls based on the Etruscan examples, making the technique a hallmark of the Castellani firm. By the end of the 1850s, Castellani’s workshop in Rome became a pilgrimage site for the British, who sought to obtain delightful gold ornaments with decorative motifs from the arsenal of classicism: shells, rosettes, urns, amphorae, rams, etc.