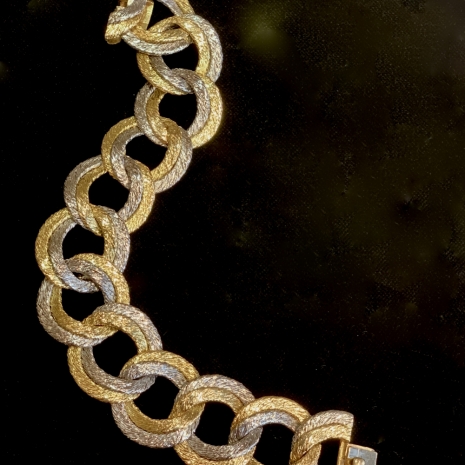 lenght: 20 cm  schakels 27mm  weight: 88,6 grams
Georges Lenfant could be described as one of the unsung heroes of 20th Century French jewellery.  A hugely skilled designer and manufacturer, he was a Cartier workmaster and made jewellery for many of the top Parisian houses of the Place Vendome and rue de la Paix.  Born into the trade, Georges Lenfant served various apprenticeships and studied jewellery both in Paris and abroad before returning home and setting up his own business at the beginning of the 20th Century.  His workshop was situated at 47 rue des Petits-Champs which was just a short walk from the glamour of the Place Vendome and rue de la Paix where his famous clients had their ateliers.  He is listed in a 1903 edition of the ‘Revue de la Bijouterie, Joaillerie, Orfèvrerie’ indicating that he was already established by this date, however he didn’t register his distinctive makers mark until 1909.  As his success and reputation grew, it is possible that he took the decision to mark his pieces so that, although they would ultimately be sold by the likes of Cartier, Van Cleef & Arpels and Mellerio dits Meller, they would also carry his mark and be identifiable as having originated in his workshop.   Between them, his craftsmen created a huge variety of jewels for a wide clientele; from elegant diamond set rings, bold gem set bracelets and finely worked gold jewels, the Lenfant workshop produced some of the most beautiful jewellery of the period.  Georges was joined in the business in 1915 by his son Jacques who was only 11 at the time but who would go on to carry his fathers legacy late in to the century.  Lenfant had been creating jewellery for Sandoz for many years when, in 1927, Gustave-Roger Sandoz decided to sell the business to his friend and collaborator. His son Gérard remained as artistic director for the next 11 years and together they created some of the most striking and original Art Moderne pieces which were characterised by bold lines, contrasting shapes and strong colour combinations.  Some years later, in the aftermath of World War II, Lenfant took over another workshop, that of Verger Frères which had been founded in 1872 and is best known for its production of fabulous Art Deco jewellery and objet. The 1950’s saw collaborations with Vacheron Constantin (who had worked closely with the Verger workshop for many years) to make watches for Hermes as well as the continuation of long standing partnerships with jewellers such as Cartier and Van Cleef & Arpels.  During the 1960’s and 70’s the Lenfant workshop produced many beautiful gold chain bracelets and necklaces which is perhaps what they are best known for today.  Jacques Lenfant was fascinated by the art of the goldsmith and the myriad different patterns, shapes and textures that could be used to create a seemingly infinite array of chains.  Finely woven textures, a combination of different colour golds and varying circular and twist motifs are all typical of Lenfant pieces, sometimes accented with a sprinkling of diamonds and always finely made, they remain highly desirable and wearable today.