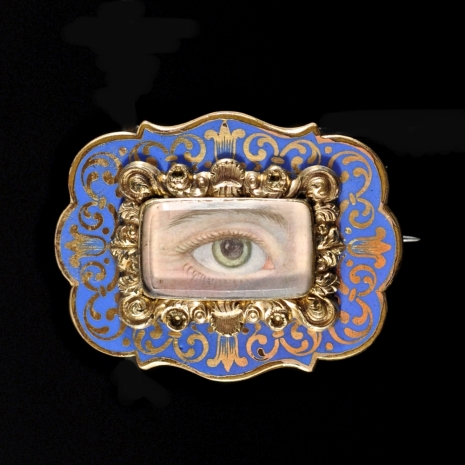 In the 18th and early 19th century lovers gave each other jewels with miniature eyes painted on them. This expressed their personal bond, because eyes are the window to the soul. Like many fashions in previous centuries also this one has a royal background. In 1784 Maria Fitzherbert became the mistress of King George IV when he was Prince of Wales. In 1785 they married in secret, but the marriage was legally invalid because they failed to ask permission to the King, which he never would have given since Maria was catholic and a commoner. Maria is the first to have commissioned a jewel with a lovers eye painted by Richard Cosway. According to sources such lovers eyes were meant to be worn inside the lapel: discreetly and close to the heart. But also ear pendents and other jewels that cannot be worn secretly are known as well.