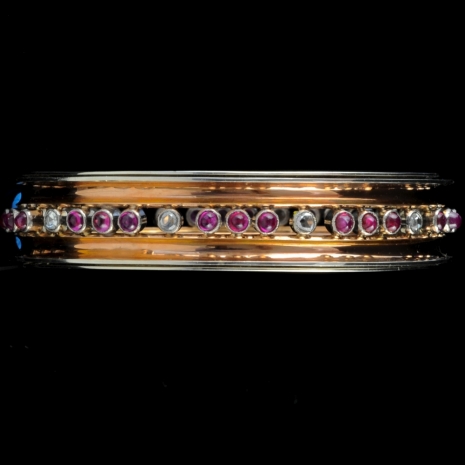 Archibald Dumbar (1916-1988) was a prominent Dutch goldsmith. Dumbar received his training at the Amsterdam Institute for Design Education. During World War II he extended his education at this institute, together with Chris Steenbergen, in order to prevent being sent to Germany for forced labour. In the first years after the war, in which he made this bracelet, he regularly received commissions from jewellers. He shared his workshop in Amsterdam with his brother-in-law Chris Steenbergen and with Esther Swart-Hudig, two other prominent goldsmiths. In the mid-50s he went on to work independently in a more sculptural style.

Dumbar presented his work in modern jewellery exhibitions in Holland. His work was a regular topic in publications in the trade magazine written by his former teacher Jac. Jacobs. He moved to Hilversum, where he presented his work at the artist collective/gallery GSA (Goois Scheppend Ambacht). In 2009, the renowned collectors Marjan and Gerard Unger donated hundreds of jewels made by Dutch designers to the Rijksmuseum, amongst which a selection of the work of Dumbar.

Hinge
In 1953 Dumbar participated in an exhibition in Franeker. On September 16, the newspaper Leeuwarder Courant wrote: [..] while Dumbar delights in incorporating in his jewels, in themselves gems of goldsmithry, various technical features. Even a man, for example, should delight in seeing the hinge of that particular bracelet. This observation applies to this important jewel. At first sight it seems a bangle, but it is not, because of the special hinge that is worked in invisibly. The years after World War II were difficult. Materials were scarce, especially for goldsmiths. This resulted in an extra focus on technique, which shows very well in this timeless, wearable and sophisticated bracelet by Archibald Dumbar.