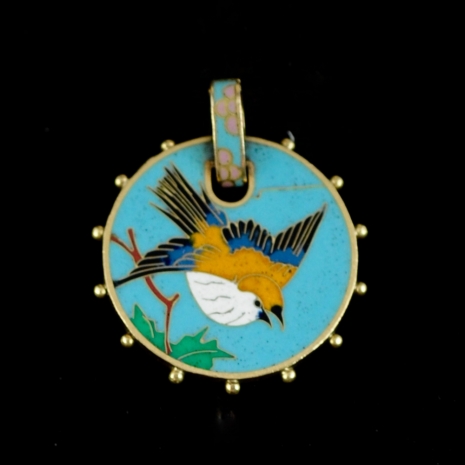 Pendant and earrings in Japanese style

The pendant with a flower on one side, a bird on the other. The earrings both with a bird.

Alexis Falize (1811-1898) began his career as an anonymous supplier of jewelry to retailers such as Boucheron and Tiffany's. Falize's firm, founded in 1838, followed the nineteenth-century fashion for the various revival styles as well as drawing inspiration from Near Eastern and Japanese sources. In 1867, Falize exhibited Japanese-inspired enameled jewelry to great success at the Exposition Universelle, Paris. Falize's son Lucien (1839-1897), who was one of the first to apply plant forms to jewelry design, foreshadowing the Art Nouveau style, continued his father's business. The firm's impressive displays at the 1878 and 1889 Expositions Universelles received great international acclaim. Throughout the second half of the century, Falize collaborated with such artists as the enameller Antoine Tard, Germain Bapst, Emmanuel Fremiet, and Albert-Ernest Carrier-Belleuse.