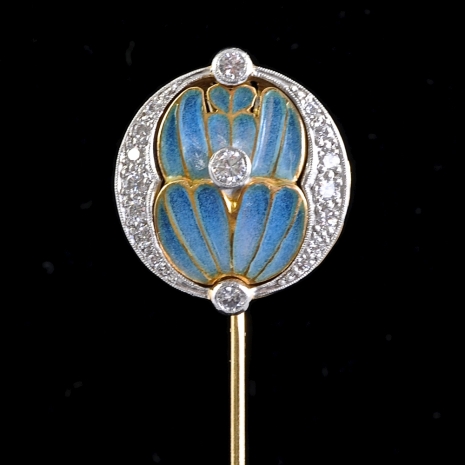 Spanish jeweller Luis Masriera (1872-1958) was born into a family of jewellers and artisans. In 1839 his grandfather had founded the business in Barcelona, and throughout the second half of the 19th century the production of the Masriera workshops reflceted the revival and adaptation of historical styles extending from Classical Rome to Neo-Gothic and Baroque, always with pronounced Spanish character.

Luis, at the age of 17, went to the Ecole des Beaux Arts in Geneva in 1879. There he studied under the famous Lossier, who introduced him to the techniques of enamelling, in particular the art of the Limoges school of the 16th century. One of his first recorded works is an enamelled vase, which was presented to the President of the Exposition Universelle in Paris by the Spanish Exhibitors. This exhibition introduced Masriera to the work of RenĂ© Lalique, an artist who was to exert the greatest influence on his imagination, and from this point his style underwent a transformation: Neo-Gothic elements remain,  but floral Art Nouveau and Japanese motifs appear.

However, a complete break with tradition only occured after the Centennial Exhibition of 1900 in Paris. There the French Art Nouveau movement was at its climax, and Masriera decided - so the legand goes - to meltdown the entire stock of his shop in Barcelona and start again. The new styles that he launched in 1901 were an overwhelming success and soon spread abroad, particularly South America. In 1906 he was commissioned to make a diadem for Queen Victoria; a creation strong in symbolism and one of the major achievements of Spanish Art Nouveau.

In 1915 Masriera went into partnership with the jeweller Carreras, himself the descendant of a family of well-established jewellers.