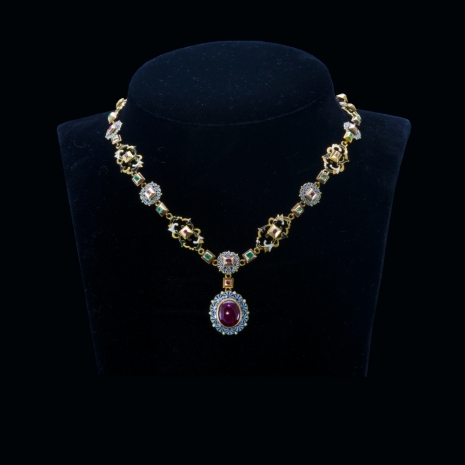 These ornaments were originally embroidered on the robes of men and woman, together with pearls and (semi) precious stones.
In the second half of the 19th Century, with a peak around 1860, much inspiration was drawn for the Renaissance period. The revival style objects are mostly of very good quality and were, next to original pieces, inspired by designs found in motif- and design books from the Renaissance.

This necklace is a beautiful mariage between Renaissance ornaments and 19th century revival ornaments, both of outstanding quality. The necklace consists of nine black and white enamelled curl-shaped ornaments set with a table ruby. Interlinked are eight rosette-shaped ornaments also decorated with an ostrich feather -like pattern in black and white enamel en set with a small ruby in a rectangular mounting, in between 16 small emeralds set in a rectangular mounting.

Two of the rosettes and two of the curl-ornaments are 19th century revival pieces. Hanging from the necklace is a 19th century oval shaped pendant set with a cabouchon cut ruby, the boarder decorated with the same black and white enamel.


Image: Elisabeth I of England