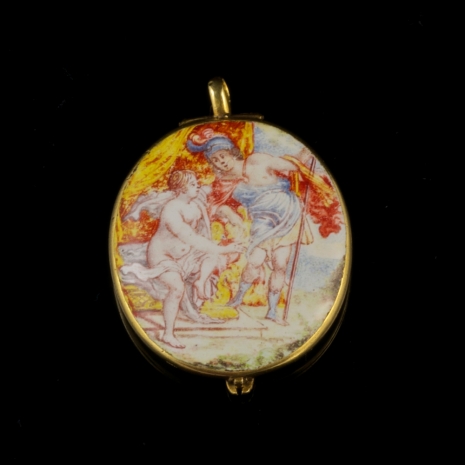 An oval gold and enamel medaillon with painted enamel pictures, School of Blois, circa 1645

This medallion is both, on the front, back and inside decorated with an particular technique that was developed in France arround 1630- to be more exact in Blois, the capital of the French region Loir et Cher.

The discovery and development of this particular technique of painting on enamel can be dated back around 1628, when the goldsmith Jean Toutin from Caâteaudun experimented with new possibilities of enameling. He developed a new method by which it was possible to create a painterly effect with a wide range of colours.
This medallion, in the collection of Dekker Antiquairs is decorated with this wonderful technique. It is colourful and has a satin-like surface finish. The images are applied with great attention and detail, like a fine oil painting.

Paintings
Between 1630 and 1670 there were two types of motifs popular for the decoration of watch cases, medallinons and other objects produces in the Blois region, namely historical scenes and floral motifs. The medallion of Dekker Antiquairs is a good example of that. Paintings and engravings of famous painters served as an example. These were often details or a simplifiedversion of the original. Especially the work of the French court painter Simon Vouet (1590-1649) was a common starting point. But also works by Sebastien Bourdon (1616-1671) and the classical painters including Laurent de La Hyre (1606-1656) were popular.

Vouet
A painting by Simon Vouet has also served as an example for the medallion in our collection. The image includes a scene of the tragic love affair between Venus and Adonis. The composition is a copy after an engraving of the painting by Vouet, manufactured by Michel Dorignys 1638. As can be seen the composition, the poses of the figures and the drape of the clothes cloths match up. Unfortunately, the original no longer exists, and the color may be different than that of the original painting.

Rubens
On the front Paris holds in his hands a golden apple, and he passes judgement on the beauty of the three goddesses depicted. The composition of the medallion is derived from a painting by Peter Paul Rubens produced between 1632-35. Although it is a free translation of Rubens Judgement of Paris, there are obvious similarities seen in the use of colour, composition and attitudes of the figures. The inside of the locket is colourfully decorated. The bottom cover in azure blue coloured enamel and the top cover is provided with a hunting scene.

As an example of landscape paintings, which are often the inside or sides of watch cases and medallions, works by Henri Mauxperche (1606-1686) and Gabriel Perelle (1603-1677) were used as an example.