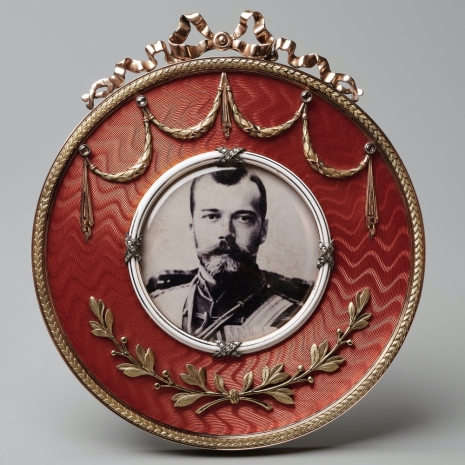 Round Fabergé miniature frame in silver, gold, enamel and diamonds, with photo of Emperor Nicholas II.
A round miniature frame in red gold with chased green gold laurel, the frame enamelled translucent raspberry red on a moire- guilloche ground, in which green gold branches and red and green garlands of laurel leafs with diamonds. The portret contains a photograph of the last Emperor of Russia, Nicholas II  surrounded with white enamel border and diamonds set in silver bows. Surmounted by a red gold ribbon tied in abow-knot.
The last Emperor of Russia, Nicholas II (who reigned from 1894 - 1917 and died in 1918).  Signed Fabergé with the workmaster’s mark HW = Henrik Wigström. (1862-1923) in St. Petersburg 1878 aged 16. His specialties were silver and gold chasing and enamelled works.  Assayers mark Yakor Lyapunov 1898-1903 St. Petersburg (Probe Meister)