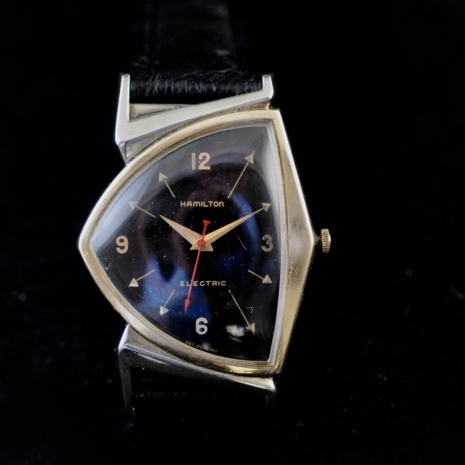 HAMILTON ELECTRIC
Hamilton started it´s quest to produce the first battery-powered watch in 1946.  The research would take more than ten years to develop a working prototype. Anxious to be the first company to produce such a watch, the Hamilton 500 was rushed to market.  On January 3, 1957, Hamilton held a press conference to announce the 'World´s First Electric Watch.' The idea of a watch which never needed winding was very exciting to consumers back in the 1950´s who were not only tired of always winding their watches, but were also captivated by progress and modernity. The Hamilton Electric was an instant hit.
Its popularity was enhanced by the fact that Hamilton released a number of very dramatic case styles with non-traditional asymmetrical styling; they were visual reminders of the ultra-modern movements inside the case. The life span of the Hamilton Electric Watch was brief, and was overshadowed by reliability problems, but it spanned one of the most exciting and tumultuous decades of the century -- from the launch of Sputnik, the first space satellite, to man´s first step on the moon. When it was first released in 1957 it really was 'the watch of the future,' but unfortunately for Hamilton the future passed them by faster than anyone could have imagined. By 1969, when production ended, advanced technology of quartz movemtents had rendered the Hamilton Electric obsolete.