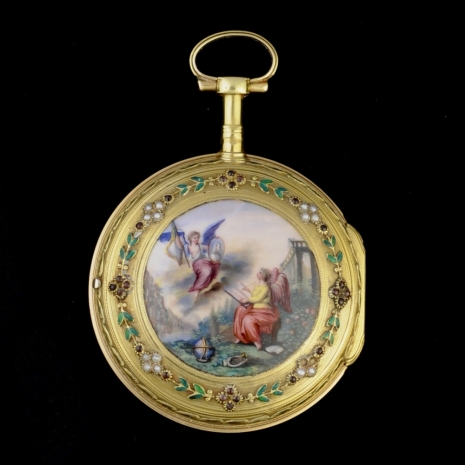 Charles Leroy (1709-1771),
“Charles Leroy à Paris” was the signature of one of the most important Parisian horologers of the Louis XV period. After having become a master on August 16, 1733, he opened a workshop in the rue des Prêcheurs, moving in 1745 to the rue Saint-Denis, across from the Saint-Leu church. Within a few years he acquired an excellent reputation among the most influential Parisian collectors of the time for his remarkable clock and watch movements. Beginning in the 18th century, several of his clocks appear in inventories; one piece is mentioned in the 1771 inventory of the collection of François de Pérusse, vicomte des Cars. A second clock, with a vernis Martin decor, was described in 1773 in the probate inventory of the wife of Jean-Baptiste Halma de Belmont, Conseiller du Roi and Grand audiencier of France: “A clock with decorated wall bracket, with pagoda and dragon, gilt bronze case, motifs painted by Martin, the striking movement by Charles Leroy, 400 livres”. After his death in Nanterre in 1771, Charles’s son Etienne-Augustin continued to run the workshop, and was named Horloger du Roi.