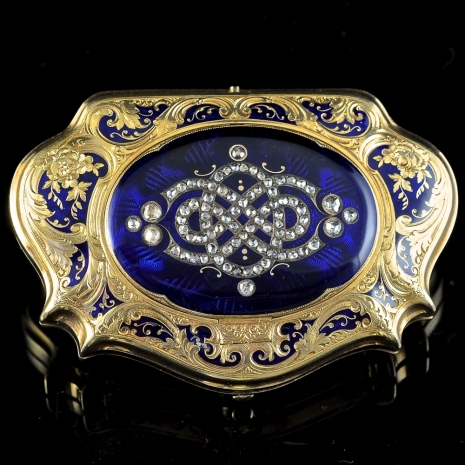 This luxurious wallet-watch was made to impress, for example during an evening at the opera. In the 19th century watches were often hidden, like in this wallet, but also in brooches and pendants. These were not meant for every day wear. During social events it was considered not done to check he time, especially for women. The still existing etiquette rule that watches are not worn during gala events is a modern remnant of this rule.

Jean-François Bautte (1772-1837) became an orphan at a very young age. When he was 12 years old, he obtained an apprenticeship in which he was trained as case maker, engraver, jeweller and goldsmith. In 1791 he signed his first works. In 1793 he joined forces with Jacques-Dauphin Moulinié in the firm Moulinié & Bautte, which was joined by Jean-Gabriel Moynier in 1804. Bautte excelled in shape watches, hidden in miniature musical instruments, butterflies and flowers. He even made a watch in the shape of a miniature gun dispensing perfume and he was one of the first to produce extra thin watches. The firm owned stores in Geneva, Paris and Florence; they traded with Turkey, China and India and they supplied to the various Royal Houses of Europe. Bautte is mentioned in the writings of Alexandre Dumas père, Balzac and John Ruskin. When Jean-François passed away in 1837, his son Jacques and son in law Jean-Samuel Rossel continued the business under the name J.F. Bautte & Cie, makers of watches and jewels. Under their ownership this portemonnaie was made.

The enameled landscape is by Auguste Dutertre, one of the great 19-th century enamelers in Geneva. A similar enameled scene by Dutertre on a cigar case with watch and key winding is in the collection of the Patek Philippe Museum in Geneva.