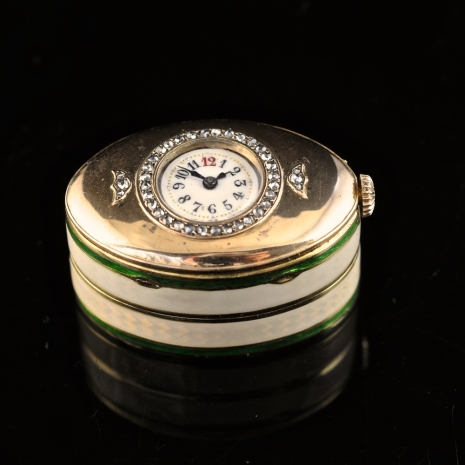 Size: 3.5 x 2.5 x 2 cm
GIULIANO Carlo Giuliano 1832-1895 Arthur Giuliano 1864-1914 1832 Carlo Giuliano (Senior) was born in Naples 1860 Carlo Giuliano moved with his wife and sons to London in where he was sponsored by Robert Phillips. He is also known to have collaborated with Castellani and sold through established jewellers such as Hancocks and Hunt and Roskell. An accomplished archaeological jeweller and outstanding enamellist, he usually avoided making exact copies of antique jewellery and evolved an easily recognizable style of his own. Though his Italian born assistant Pasquale Novissimo, was technically and artistically his equal, the incredible delicacy of the enamel decoration made Giuliano´s renaissance -style pieces extremely difficult to copy, and the work by other firms in his style is usually technically inferior. 1861 Giuliano established his own business at 13 Frith Street, where he traded as a manufacturing goldsmith and jeweller. It is likely that this business was in fact owned by Castellani and Giuliano was the manager. 1875 he acquired the retail premises at 115 Piccadilly where he spent the rest of his working life. The Frith Street premises were retained as a workshop until 1877. 1882 Federico and Ferdinando Giuliano, who were likely to be his his brothers, opened their own workshop as manufacturing jewellers at 24 Howland Street moving in 1886-7 to 47 Howland Street. From 1896 the business at 115 Piccadilly. which had been bequeathed to his actual sons, was known as 'Carlo and Arthur Giuliano'. 1903, Federico and Ferdinando gave up the Howland Street premises, the family retaining only the retail business at 115 Piccadilly. 1911-12, the business, still called Carlo and Arthur Giuliano moved to 48 Knightsbridge as manufacturing jewellers. 1914 Their business closed